Metropolitan Cathedral Our Lady of the Apparition

The cathedral of Brasilia is a circular plant with 70 meters of diameter, and with 16 curved pillars joined together by a compression ring.

The project, which at first seems very simple, is full of symbolic and architectural references. The architect Oscar Niemeyer was aware that the Cathedral should be unique, combining past and updated traditions, and retrieving elements of the Gothic and Renaissance conception, merging them into his work, creating something new at the same time “traditional” and “revolutionary”. It works surprisingly the contrasts and effects of lights and thus obtains a unique church.

The entrance is at the ground, with a ramp leading to 3 meters below the level of the esplanade as a passage from the dark to the light.

As part of the set in the outside we find the bell tower (1977) and on the left side the baptistery with the ovoid cover both visible from the outside. The works of art integrating the architecture is common in Niemeyer´s works.  Looking outside the entrance it has the bronze sculptures with three meters of height representing the four evangelists, work from Alfredo Ceschiatti with the help of Dante Croce. The statues recall, in a new way, the “atrium” of the baroque churches establishing a dialogue between the modern architecture and the Colonial Brazilian architecture. Also from Ceschiatti are the angels inside the church, three sculptures in aluminum, suspended by steel cables in the center of the nave.  With 100, 200 and 300 kilos respectively from highest to lowest, representing the three archangels Saint Raphael, Saint Michel and Saint Gabriel. 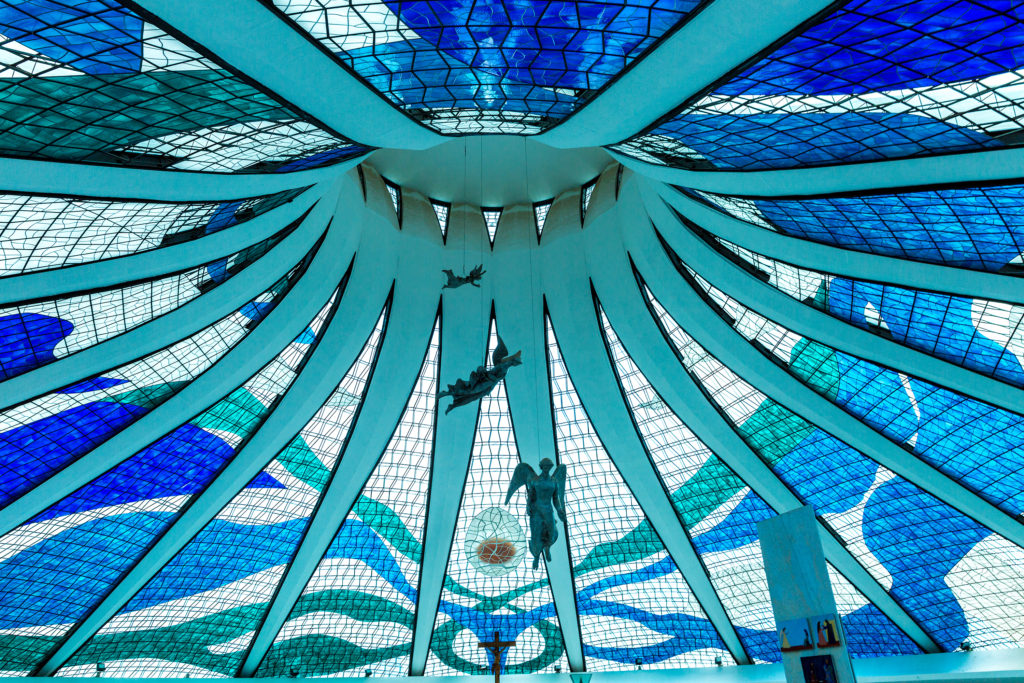 On the outer wall of the shop is the Via Crucis from Di Cavalcanti, 15 oils on canvas, measuring approximately 0,60 x 0,60 each describing the way of the passion.